The first computer I used was my father's BBC micro back in the '80s where I played games as a kid, and later I wrote my first lines of code together with my brother, trying to make our own simple games in BBC Basic.

During my studies in the IT faculty of the Technological Educational Institute of Athens I had the chance to work on many interesting programming languages like Pascal, Java and C++. While I was enthusiastic about programming I new there was a lot more to learn so I acquired a postgraduate degree in Networking and Data Communications at Kingston University of London.

After working as a web developer with ASP.Net, C# and MS SQL for four years I made the leap to Drupal with PHP and MySQL when I started working in Netstudio. It is amazing to see all the possibilities unfolding before you. It is like another world had opened for me.

In Netstudio I found the working environment everybody would like to have, and the excitement of working on amazing projects from which you always learn something new.

What excites me most in our field is that the more you learn, the less you know. This is a way to keep yourself humble and always learning. 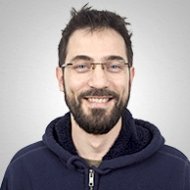